Our Lady of Grace

As in so many other instances, the title given to the Blessed Mother as “Our Lady of Grace” originated both with a story of personal devotion – as well as with a miraculous moment of divine intervention. In this instance, the story goes back a little over 400 years.
In 1610, a Carmelite monk named Dominic of Jesus-Mary found in the monastery church of Maria della Scala in Rome an oil painting of the Mother of God, dust-covered and somewhat torn.  He dusted it, and kneeling down, venerated it with great devotion. Renovating the picture, he made it the object of his supplications on behalf of those who came to him in affliction.
One night while he was praying, he noticed that some dust had settled on the picture. Having nothing but a course woolen handkerchief, he dusted it and apologized, “O pure and holiest Virgin, nothing in the whole world is worthy of touching your holy face, but since I have nothing but this coarse handkerchief, deign to accept my good will.” To his great surprise, the face of the Mother of God appeared to take on life, and smiling sweetly at him, she bowed her head, which thereafter remained inclined.
Fearing he was delusional, Dominic was troubled, but Mary assured him that his requests would be heard. He could ask of her with full confidence any favor he might desire. He fell upon his knees and offered himself entirely to the service of Jesus and Mary, and asked for the deliverance of a benefactor’s soul in purgatory. Mary told him to offer several Masses and perform other good works, and a short time later, when he was again praying before the image, Mary appeared to him bearing the soul of his benefactor to Heaven. Dominic begged that all who venerated Mary in this image of Our Lady of Grace might obtain all they requested. In reply the Virgin gave him this assurance: “All those who devoutly venerate me in this picture and take refuge to me will have their request granted and I will obtain for them many graces; but especially will I hear their prayers for the relief and deliverance of the souls in purgatory.”
Dominic placed the image prominently in the church of Maria Della Scala so that more devotees of Mary could venerate it. Many wonderful favors were obtained by those who honored and invoked Mary here. Reproductions were made of Our Lady of Grace and sent to different parts of the world. After the death of Dominic, the original painting was lent to Prince Maximilian of Bavaria. He gave it to the discalced Carmelites in Munich in 1631; they gave it to Emperor Ferdinand II of Austria and his wife Eleanore. After Ferdinand’s death, Eleanore entered the Carmelite convent in Vienna and took the picture with her. During the succeeding years the image was transferred to various places. Today it is in the monastery church of Vienna Doabling. September 27, 1931, it was solemnly crowned by Pope Pius XI – the 300th anniversary of its arrival in Vienna.
Today, the feast day of the Blessed Virgin under her title of “Our Lady of Grace” is celebrated on February 7th.
(adapted from www.roman-catholic-saints.com/our-lady-of-grace.html) 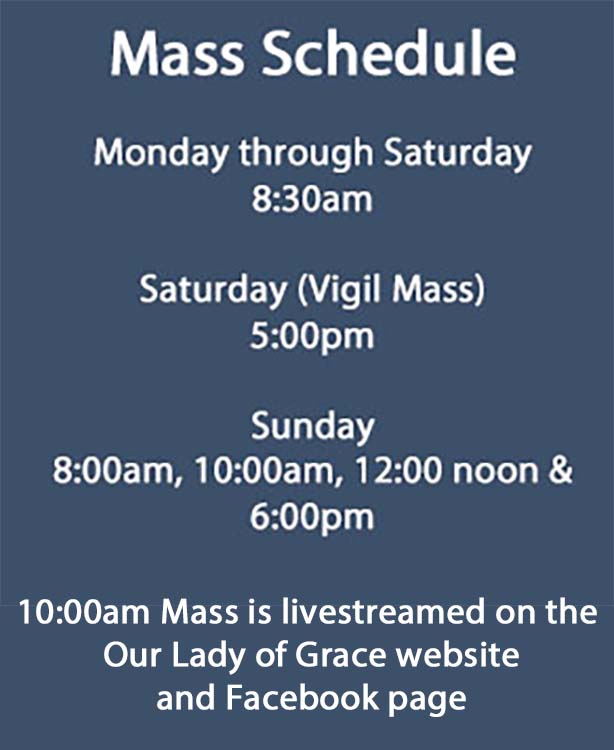