Why Bother With the Nicene Creed?

While it is often said haphazardly at mass, the Creed's power and purpose is an important part of the mass that demands our voices and attention. 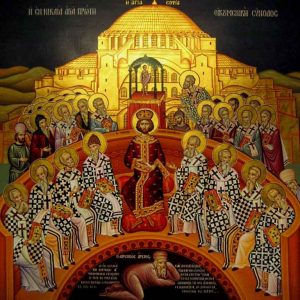 The Nicene Creed, said during the mass on Sundays, and at the vigil mass on Saturday night, is an important part of holy mass.  Though it is often recited haphazardly and without due attention (sometimes not at all), by some during the mass, it’s recitation is an important moment in the liturgy that literally demands and requires our attention and our voices.  But why do we say the Nicene Creed? Don’t we already know what we believe? Why repeat it every week?  And why don’t we say it at the beginning or end of the mass?

Its power has purpose and is steeped in salvation history.”

The Church adopted the Nicene Creed at the First Council of Nicea in the year 325AD, and added to it at the council of Constantinople.  It was officially accepted as part of the mass in 1014.  It’s a summary of Catholic belief, similar to the Apostles Creed, but with added detail or emphasis on the two natures of Christ (Human and Divine).  It is the symbol of our faith, meaning it brings together, in a concise way, everything that we believe as Catholics. Its presence in the order of the liturgy is not random or accidental.  Its power has purpose and is steeped in salvation history.

The Nicene Creed is recited after the Liturgy of the Word (the readings, the Gospel, and the Homily) and before the Liturgy of the Eucharist.  Its intentional placement there is rooted in a liturgical model found in the Old Testament.  In Exodus, when Moses and the Israelites are preparing for the ratification of God’s covenant on Mount Sanai, we see can’t help but see images of the mass reflected there:

Exodus 19:7 “Moses went and summoned the elders of the people.  When he set before them all that the Lord had ordered him to tell them, the people all answered with one voice, ‘Everything the Lord has said, we will do.”

In chapter 19 you see the reading of God’s word, and the people responding to God’s word with one voice, in the form of a promise, “Everything the Lord has said, we will do.”  But there’s even more in chapter 24:

“[Moses,] taking the book of the covenant (like the readings/Gospel), read it aloud to the people who answered [with one voice] ‘All that the Lord has said, we will heed and do.’ Then he took the blood and sprinkled it on the people (like the consecration of the Eucharist), saying, ‘This is the blood of the covenant which the Lord has made with you in accordance with all these words of His.’”

The sprinkling of the blood in Exodus foreshadows the consecration of the Eucharist at mass, which seals the New Covenant of Jesus in the blood of Christ.

The Israelites saying “All that the Lord has said, we will heed and do” is a response to God who has just spoken to them in His word. Their response is an implicit acknowledgment that they believe what God has said in His word, and it’s an explicit promise that they will “heed and do” what he has told them.  This response by the Israelites may be formally different from what we’re doing in the recitation of the Creed, but it is substantially identical.

Our “I believe” comes with an implied promise to live what we believe.

A Profession and a Promise

The book of James (1:22) says, “Do not merely listen to the word, and fool yourselves.  But do what it says.”  The Israelites in Exodus, having heard God’s word, make a promise to do what it says.  We are making a similar promise because when we explicitly profess our faith (“I believe..’) we are implicitly promising to live what we believe (‘I will heed and do”).

Our “I believe” comes with an implied promise to live what we believe. Not to just hear God’s word in the readings, but to “do what it says”.  Not just to believe all that what we profess in the Creed, but to live like we believe them.  Belief, by itself, has no value and no merit.  Only a belief paired with a dedication to live by the light of that belief has merit.  The devil believes every word of the Nicene Creed. He can recite it just as readily as you can.  But the devil chose not to live what he believes. He separated “I believe” from “I will do”.  Let’s not do the same thing.

The Nicene Creed isn’t a bunch of babble that we should recite mindlessly every Sunday.  It has meaning and purpose, and power.  When you recite it mass, remember to say it with good attention. Don’t skip it in silence, or just mumble the words.  Do you believe what’s professed in the Creed? Then say it like you believe it.  The Creed is an important part of our history, and an important part of the mass.  It’s a response to God, who has just spoken to you in His word, and it’s a promise to God that you will heed and do what you have heard, that you will live what you believe, so that by His grace and mercy you might live with Him forever in Heaven.

Icon of the Council of Nicea

Emperor Constantine, accompanied by Bishops of the First Council of Nicea, holding the “Nicene-Constantinople” Creed.

The first line of the. main text in Greek: Πιστεύω εἰς ἕνα Θ[εό]ν, πατέρα παντοκράτορα, ποιητὴν οὐρανοῦ κ[αὶ] γῆς,. Translation: “I believe in one god, the father the almighty, maker of heaven and earth”.

Listen: The Secret to Glorifying God?

Is the Nicene Creed Anti-Women?

Howard BeachNY
Mass Times: Saturday (vigil) 5pm; Sunday: 8am, 10am, 12pmChurch of Our Lady of Grace